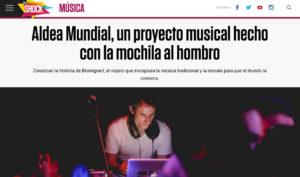 In the magazine of Viva Air (Colombian/Peruvian based airline): 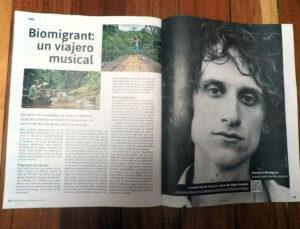 In Radionica (National Radio of Colombia)

Presenting the videos from the project, Biomigrant finally unveils the visual aspect of his fantastic Aldea Mundial album released through Regional Label last year. Recorded as a part of numerous community projects and gatherings, and trips across Latin America including Belize, Guatemala, Mexico, Colombia and Ecuador, the authenticity of this project is instantly recognizable.

This first video of the project which was primarily shot in Colombia revolves primarily around the concept of life and death, and the video certainly plays on this topic, gradually progressing from nature shots to nearby barren mine-scapes.  Props should be given to Biomigrant for balancing the morbidity of this track with a sense of resilience, as exemplified through Toño Garcia’s words in the video, translated to English as:

“Death came looking for me
And i told him, sonofabitch, have some respect!
I’m only 100 years old
Go back to where you came from
Nobody fucks with me…”